You can use the _Q#A#PCT_ metavariable to display the percentage of people that selected a specific answer.

The fastest and easiest method of displaying your results is to go to the Completed Screen tab on the Describe page and set Results to “Show immediately after last question” or “Show after completed message”. Alternatively, if you’re working on a quiz, quiz questions have an option called “Explanation Text and Results” that if checked displays the results of the question after it’s been answered.

However, if you’re doing something more complicated or just want to grab a percentage from somewhere instead of displaying everything (such as if you only want to display how many people got the answer right, rather than what the answer is and all the other percentages), use the _Q#A#PCT_ metavariable. If you enter it into a text block (with the question number after the Q and the answer number after the A) it’ll be replaced by the appropriate percentage when your users see it.

For example, if I used this text:

And two out of three people picked answer 1, it’ll display this: 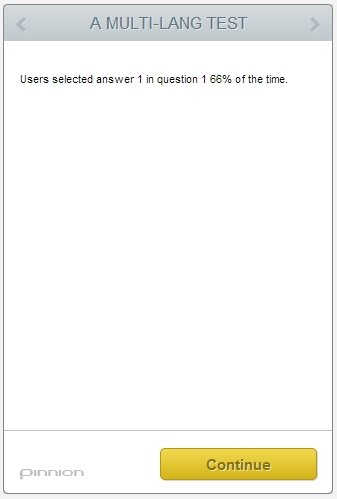 Bear in mind that metavariables like this only function inside blocks. Putting it in the question text won’t work. Furthermore, the percentage that appears is only a number (say, if 3 out of 4 people picked answer 1, _Q1A1PCT_ would display 75). This means you’re free to add a % symbol after the number or represent it any way you like (such as the number of people out of 100 that picked an answer).